Our Food Drive, supporting the Second Harvest Food Bank is in the books.    The event was plain gratifying on so many levels.

The board’s preparation was detailed and responsible as possible. Event Chair, Larry Inman worked with the Second Harvest management to coordinate particulars of the donation and Dave Boyd used his work experience to develop a “Safety and Procedures” plan to reflect all manner of “social distancing” and stipulated PPE. Brian Sturkie was in frequent communication with PCA Vice President Cindy Jasicin to secure PCA buy-in. The request for event insurance ultimately went all the way to the full PCA Executive Committee, with Collin helping to present “our case”.

In the end, with full PCA backing, the event went off without a hitch!

Make sure to check out the “Photo Gallery” on the website for photos of all the participants and organization.

We also have to give a BIG shout out to Nico and Victoria of Migliore Motorwerks for their support, hosting the drop-off location.

This year’s Annual Dinner was a delightful treat.  The venue at the Reed Carseum in Modesto was very welcoming and was set up very nicely! The car displays were impressive with a very nice, red soft top Targa SC, flanked by a blue Pantera and a black Ferrari! All sorts of other yummy cars were there to help with the backdrop. And unlike many other auto museums, a number of the cars were “open” to sit in (not the Pantera, sorry!)

John Reed kicked off the evening with an introduction to the museum, how his father started it and how the family continues to expand the holdings. He relived how they came to buy the Porsche and how it was one of the family’s favorites (yea, I bet that Ferrari was the family favorite when some “other” car club visited the museum! The final count of attendees was 58 members, including some “new” members. Ted Fisher, a transfer in member and long time friend of the Pierces, drove in from north of Sacramento!The evening started with a social hour, beer and wine (thank you Brian!) and hours d’Oeuvres, giving everyone time to reconnect with old friends and make new ones. Just to spur memories, a “slide show” of all our events from 2019 played on a HD TV. Dinner was a three course meal with salad, a very tasty beef and poultry plate and desert.

After dinner, Brian started the “business” part of the meeting, with a power-point presentation — just enough to keep things on track. Of course, he welcomed everyone and gave a brief glimpse of the health of the region (more on this later). Brian introduced the board with particular attention to the “new” board members: Dave Boyd (VP), Larry Ingleman (Treasurer), Anthony Vierra (Membership). Of note was the growth of the region — now with over 250 overall members (over 150 “primary” members) and, interestingly, 7 “Junior” members — a nice demographic to highlight for future growth!

Brain then moved to announcing the “Member of the Year” award. This year, the region had the honor to recognize the incredible contribution of BOTH Chuck and Jennifer Pierce. The impact that Chuck and Jennifer had on energizing, expanding and making the activities FUN cannot be overstated.

If you missed this event, we are sorry (for you) as everyone had a grand time. Below is evidence of the good times:

Some regions go on and on about their “Car’s and Coffee”. Yosemite Region was not to be outdone by those regions (or to Jerry Seinfield’s “Comedians in cars getting coffee”), so our first event for the 2020 year was “Porsche & Pints”, and it went VERY well!
Turnout was encouraging, especially for January, with 32 (or 34 — we lost count) members and almost 20 Porsches in the lot.

Everyone arrived right around 11 AM and gathered at two tables and ordered their beers and lunches at the same time.  New member John Dedonatis and his wife joined us in his black 1983 911 SC cabriolet (she drives a 2014 Cayman!) for their first Region event and had a great time.  There

was a lot of interest in both the Yosemite Drive in April and our 2020 calendar.   Chuck was on hand to answer Parade questions. Another highlight of the day was getting to visit with Kris and Julien Kirkbride, wife and daughter of our VP in 2018, Larry Kirkbride  (RIP). We got a lot of positive feedback about the location from those who live south of Modesto and there was interest in repeating this in the summer when the weather is better and the patio is open.

Dust Bowl did a masterful job of accommodating us. Our server Amy Rose was certainly up to the task and kept everyone’s food and drink tab separate while providing flawless service. After lunch, John Greenburg, his wife and I stayed around for the free brewery tour and tasting. The facilities are amazing and although the brewery is relatively new it seems like they’ve already outgrown it. For those of you who missed it, we will definitely do a Porsches and Pints again. Another Valley brewery, Blaker, is opening a brewroom down near Castle AFB so we might try that one next time. But, Dust Bowl will be hard to beat.

Part one of the Yosemite Region’s 60th Anniversary Celebration was a “Drive and Stay in Yosemite National Park”. We only were able to reserve 15 rooms at the (now re-named) Wawona Hotel, which was a shame since all 15 rooms “sold out” very quickly! Definitely, the “hot ticket”! The weather was perfect as the Drive started and headed up to the hills. After a “rest stop” in Coulterville, the long line of Porsches headed to the first “photo stop” as the Golden Chair Highway (Hwy 49) crossed Lake McClune. With George Hatfield taking the lead, we headed up the hill and onto Yosemite National Park. Once in the park, our group had to make a decision to either:  visit the Maraposa Grove (of Big Trees) or head to the Wawona Hotel, check in and relax.   To no surprise to any of us, George headed to the Maraposa Grove — with a few of us in tow.   We had to park down the hill from the grove and the NP service provided shuttle service to the grove itself.  The path was a gentle walk and the trees were awe inspiring. While the hardy hikers were taking in the trees, the rest of the tour headed to the Hotel and checked in.   The hikers rolled into the Hotel grounds, puttering along at 25 mph (per George’s exact instructions!).    The fact that Ron and Laurie, in their Green GT3RS, had a NP Police Car on their bumper surely helped keep our speeds in line.   When we pulled into the hotel parking lot, two (other) NP Police cars had pulled over a (new, blue) Porsche Carrera — not part of our group.  The rangers were really in the drier’s face!!  Too bad he didn’t get George’s instructions as it would have saved him a lot of $$. Phil and Gloria Harris headed that advance party, and laid claim to a corner of the Hotel’s veranda. The chance to chat with friends, snack on some munchies and drink some (OK, a lot of wine) was the perfect way to wait for our dinner reservations.    The Hotel’s restaurant was packed, and we had to stagger our dinner times.   Still, it was a great evening to end our first day of our Anniversary celebration. Day two dawned with a cloudless sky.  Time for another photo op!! Chuck talked the hotel management into letting us park in front of the hotel for a group shot (Phil’s Lexus didn’t make the photo — his early air cooled 911 was still being tuned by Nico at Miglorie!) Next, George gave a drive briefing before heading on our drive into Yosemite’s valley floor and its granite monuments.  The valley was pretty crowded so our photo opportunities were somewhat limited, but we did have chances to stop and take in the views.. The 15 couples who did the drive and overnight stay at Wawona Hotel had a great time and did a good job of kicking off our Yosemite Region’s 60th Anniversary Celebration!

This year’s version of the “New (and old) Member’s BBQ was greeted with wonderful weather, not so hot but bright sunshine and attended by a record number of “members” — 53, bringing a new record of 30 cars on “display”.   The Pierce’s back 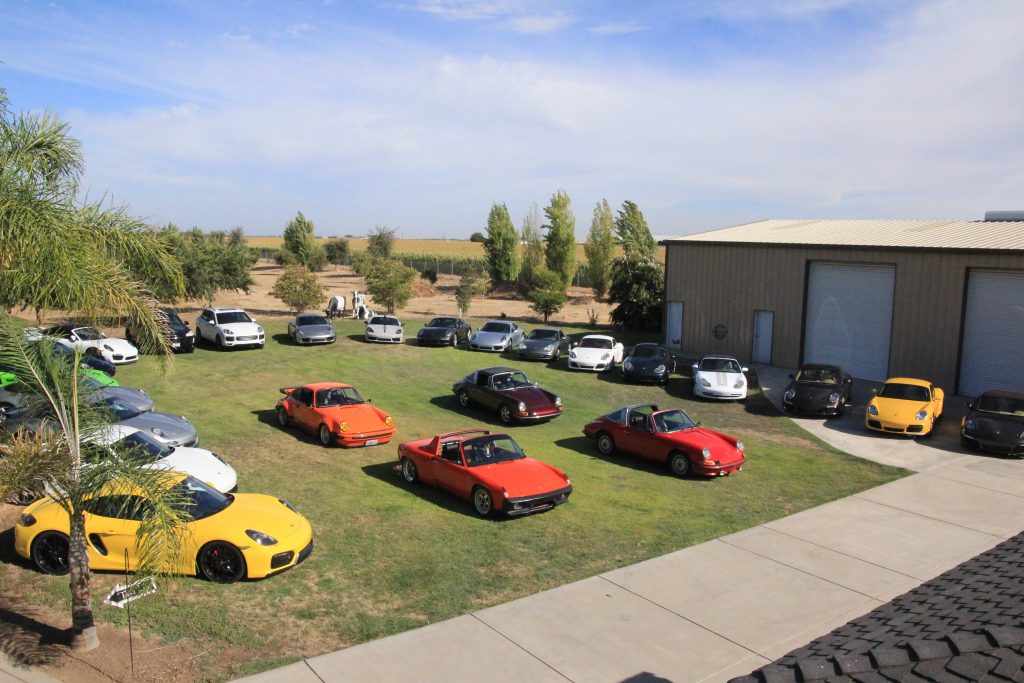 yard again provided a great venue to for the display of cars racing from Andrew Dalen’s (modified) 914, to Fred Miramontes and Larry Watson’s 911 Targa to Larry Alvarez’s lovely Carrera.   Surrounded by an array of later models (in alphabetical order!) of Boxsters, Carreras Cayenne’s, Caymans’ and Ron Tinkey’s unmistakable GT3-RS! 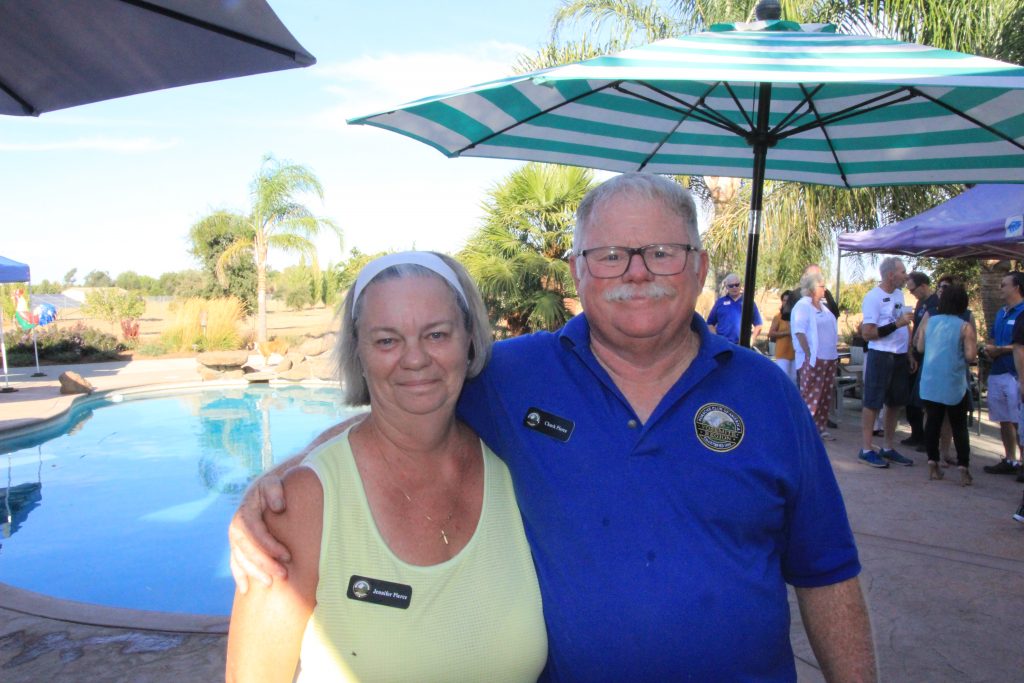 But the highlight of the event was the member’s themselves.   First, let’s give it up for Chuck and Jennifer Pierce for opening up their home for the event.  What a venue!   Though Chuck will be stepping down as “president” at the end of the year, there is a ground swell to ask them to continue offering their home for this Yosemite signature event next year — and years to come??

Oh yea, there was also the “BBQ” !!  In addition to Chuck’s “smoked” pull pork, this year the BBQ featured Tony and Mercedes Vierra creating a “Portuguese paella”:

The day was spent munching snacks, catching up with old — and NEW — friends and having a great meal.

What a fitting party for the region, as it celebrates its “60th Anniversary”..  and a fitting thank you to Chuck for his hospitality ! 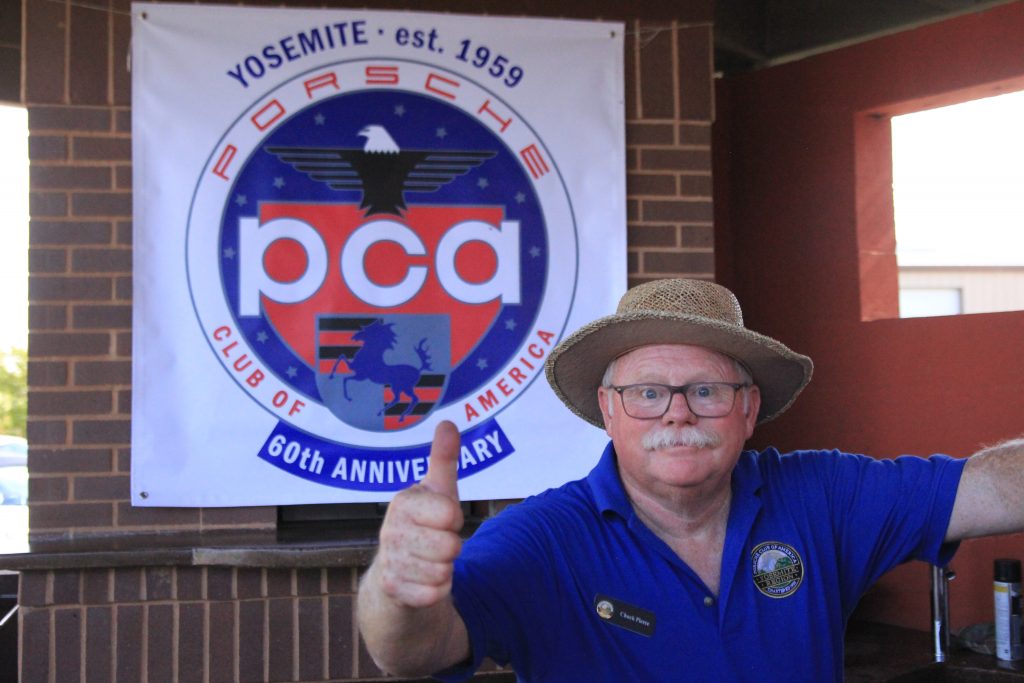 We are a group of car enthusiasts that love all that is Porsche. Since 1959, members of the Yosemite Region have pursued their passion for Porsche. We invite you to join us in the continued celebration of the marque.

Our goal is to provide members with opportunities to enjoy their cars. We sponsor tours and social events throughout the year so members have a chance to get together, drive their cars, meet new friends and renew old friendships.

Want to see up with what’s going on with YOS Region?

OWN A PORSCHE? JOIN THE CLUB

APPLY ONLINE NOW
For more information about PCA membership and to apply, click the PCA icon below