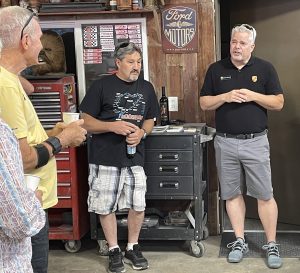 Frank Zucchi hosted 29 members and friends of Yosemite Region at his restoration shop where he does bare metal up restorations and repairs on foreign and domestic cars.   There were Porsches, Ferraris, Mustangs (fastback and coupe race car), Alphas and more in the shop for both minor and major (bare metal up) work.

Frank started in “the business” watching his father who was a master metal worker. Frank followed his father into the restoration business with an internship at Lamborghini in Europe. Frank was making the point that the number of true craftsmen, who are truly qualified to this sort of restoration work is getting smaller and smaller and will, one day, threaten the chances of bringing these sort of fine motors back to their glory. 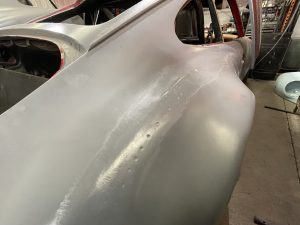 The type of work that true craftsmen do is amazing.   It takes work and skill to build out proper flares on cars, like this one being worked up on a 911 (left).   There were other, even more serious restorations in progress.   One Mustang fastback was being almost completely rebuilt, with metal fabrication on the rear bumper and fastback.   It is almost impossible to believe how such metal work could end up looking so beautiful.   But Frank said “that is part of the problem”, because some shops without the craftsmen’s skill don’t do it correctly — to the point of being a scam job! 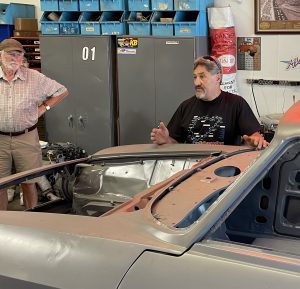 Frank walked over to a “tub” that he was beginning to work on, one that the owner brought to him almost done.   But when he looked at it, closely, he had to inform the owner that the car needed to be completely stripped down to bare metal.   Instead of doing metal work the right way, the job had  “bondo” covering up all sorts of short cuts to proper metal work — pointing them out us as he went along.   OK, this is scary stuff, but Frank was emphasizing that for truely proper restoration work, it pays to really know the shop and to keep tabs on what is going on. 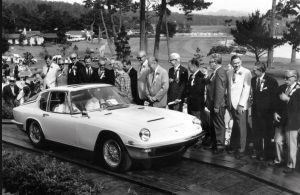 My favorite story that Frank told was about his father working on a Maserati Mistral for a fellow who wanted to get the car into concours competition.   After a bit of work and some minor successes, he called back and wanted to enter it into the Pebble Beach Concours.   After a LOT of work the car was entered, and it WON “Best of Show” in 1968 (pictured here, from Pebble Beach Concours website).  A few years after winning the event, the car went “missing”.  40 years later, a guy calls Frank to see if he could look at a Maserati Mistral that needed some work.  Just his cup of tea, but when he saw the car, something peaked his interest.   He called his dad and, “Hey dad, remember that Mistral you worked on for PB?  Can you tell me what you did on that car?”   So Frank’s dad, started to describe the car, the work he did.  Then Frank asked, “Dad, do you remember the VIN #?”  When the “new” owner heard Zucchi senior rattle off the last parts of the VIN, clearly visible on the car in Frank’s shop, he was blown over.   A great story to be sure.

All in all, the talk gave us a unique view into proper restoration and was a wonderful opportunity to get together with new and old friends.

For me it was a bit special because Nichole Zucchi wandered around looking at “our” cars. She picked out her “favorite” for a prize (a nice bottle of Napa wine!) – and the winner just happened to be “my” Cayman GTS. Seems that Nichole has a thing for “yellow” cars!